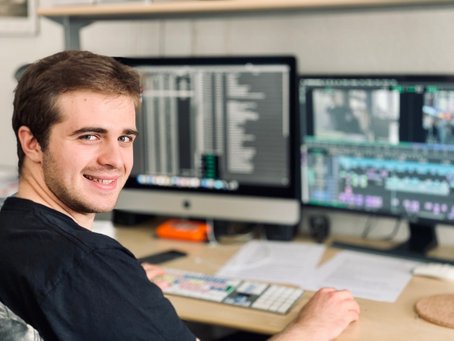 Marcel was born in 1997 in Herrenberg. He grew up from 1999 until 2018 in his hometown of Frankfurt am Main. Since 2018, he has been living and working in Berlin.
Ever since he was a kid, he was fascinated by film and storytelling set on the big screen, on VHS-tapes and DVDs. In 2010, while pursuing the dream of becoming a journalist, he encountered film director Lancelot von Naso with whom he worked in 2012 during the filming of “Komissar Marthaler – Die Partitur des Todes” (2014). From that point onward, the dream of going into film was set in motion.

He went on to write his first movie scripts and to direct short films at his school. After graduating high school, he directed his first short film which was later shown at the Visionale Film festival.

From 2016 until 2018, he took his Bachelor of Arts degree in Digital Film Production at the Middlesex University London in cooperation with the SAE Institute in Frankfurt am Main. During his studies, he directed four films and assisted on the set of “Das doppelte Lottchen” (2017) and “Eine Hochzeit platzt selten allein” (2019) in Frankfurt.
In 2018, he met film director Hans Weingartner and worked with him to complete his latest movie “303”, from developing scenes, to the Making-of and editing interviews.
His love for traveling set him on the AIDA Cruises in 2019 where he worked as a TV-Operator for four months on AIDAaura on the production of travel films and recording the Live-Shows on board. A second contract with AIDAbella at the start of 2020 was followed by the Corona pandemic and the lockdown.
His passion lies with feature films and documentaries on the big screen.
At the moment, he is working on scriptwriting and developing feature films.

He is a member of Filmschnittverband e.V.